LAS VEGAS, Jan 5 — BMW unveiled yesterday the prototype of a car that can change colour and showcases digital features like projecting driving data across the inside of the windshield.

This car, called i Vision Dee, was presented at the Consumer Electronics Show in Las Vegas at an event attended by Terminator actor and former California governor Arnold Schwarzenegger.

BMW unveiled last year at this same show a car that could change hue but only from white to black and gray in between.

But the body of the new car can change in a rainbow of colours, in one solid hue or in stripes or checks.

BMW i Vision Dee is just an idea for now but it is supposed to shape the design of future cars from the luxury manufacturer.

For example, having driving data such as speed or direction flash on the windshield is scheduled to be an option as of 2025.

BMW has also raised the possibility of projecting augmented reality images on the windshield and turn it into a full-fledged screen with technology that mixes “real and virtual worlds.” (From left) Actor Arnold Schwarzenegger appears onstage with Chairman of the Board of Management of BMW AG Oliver Zipse during the BMW keynote address at CES 2023 at The Pearl concert theater at Palms Casino Resort on January 4, 2023 in Las Vegas, Nevada. — Ethan Miller/Getty Images via AFP pic

The idea is to use software to create “the ultimate companion” offering a personalized driving experience, said BMW chief Oliver Zipse. The name Dee is an acronym for digital emotional experience.

Schwarzenegger joked about a prototype brimming with all this new technology.

“I was a little concerned because in most of my movies the machine was the enemy. Now they are the allies,” he said. — AFP 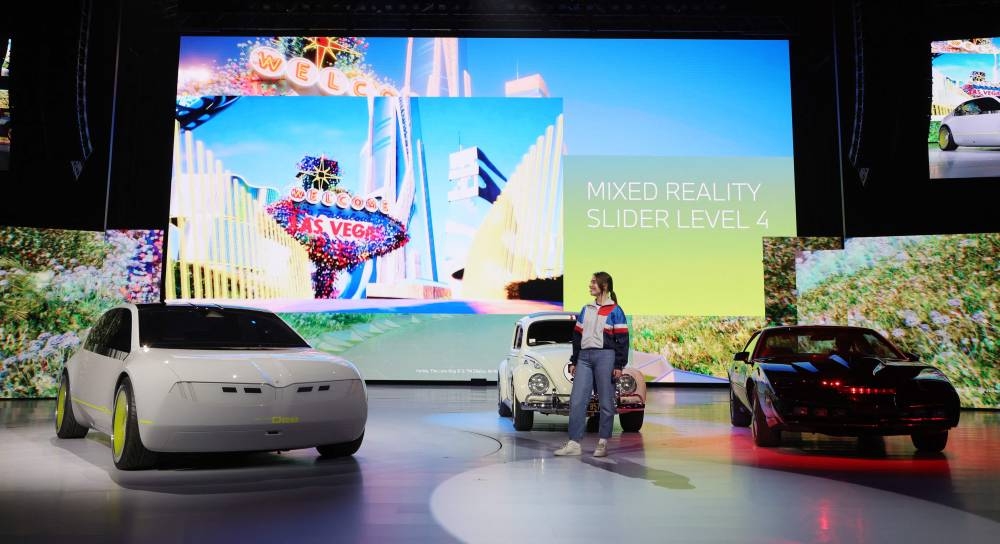 (From left) The BMW i Vision Dee (Digital Emotional Experience) concept EV sport sedan is introduced onstage next to a Herbie, the Love Bug 1963 Volkswagen Beetle and a KITT (Knight Industries Two Thousand) 1982 Pontiac Trans Am from the television series ‘Knight Rider’ during a keynote address by Chairman of the Board of Management of BMW AG Oliver Zipse at CES 2023 at The Pearl concert theater at Palms Casino Resort on January 4, 2023 in Las Vegas, Nevada. — Ethan Miller/Getty Images via AFP pic