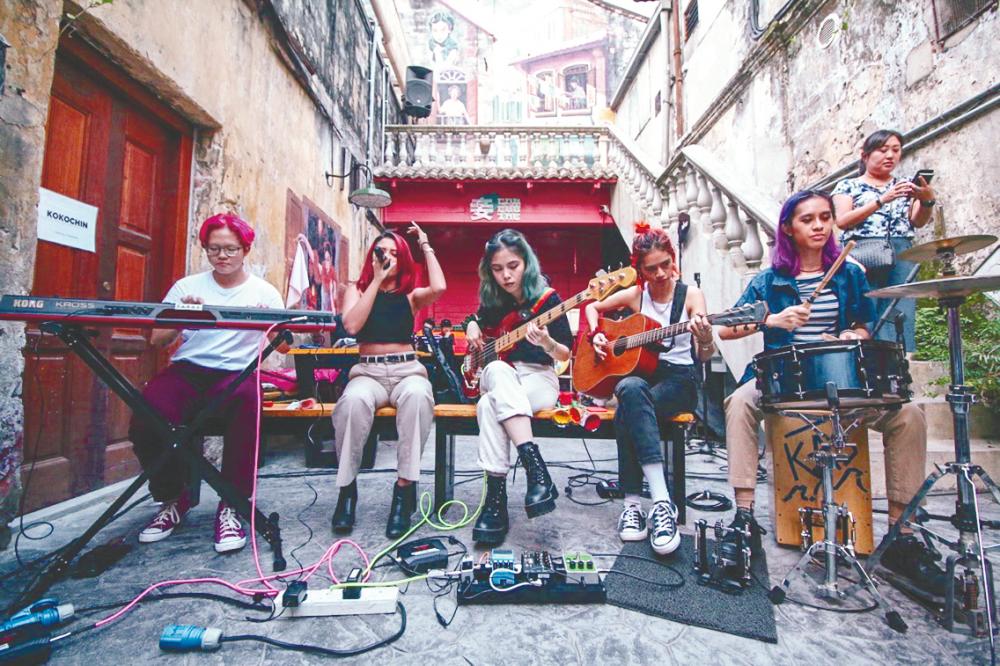 BELTING out alternative rock and roll songs in bars and gig venues around the Klang Valley, all-girl band TimeMachine has carved out a niche in the local independent music scene, evident by a growing fanbase and a demand for the energy the band brings.

Though officially formed while all five members were in university, some of them have shared histories, while the rest easily fit into the same outfit now called TimeMachine.

Lead singer Charlotte said: “It was really a case of a bunch of girls with similar interests and drives, coming together to play the music we loved. Kassie, Krychell and Gladys have been friends since primary school, and were playing music together since then as well.

“After they came to uni, they met Cassandra, Krychell’s classmate, and they all really clicked. They began playing as a band together for uni functions.”

Charlotte was performing on her own in university around the same time.

“During a 1980s-themed event rehearsal, I watched them rehearse their set and was very, very enthusiastically in love. They heard me screaming and decided to approach me to join their performance as a back-up singer. Of course I was ecstatic, and we’ve been performing together ever since.”

Bassist Gladys cites the movie Camp Rock as an inspiration during the early years when she began playing with drummer Kassie and guitarist Krychell.

Cassandra, the keyboardist, added that she thought the band would be a temporary thing due to previous singers not clicking with the four main members. This changed when Charlotte joined.

“Forming the band with Charlotte just felt very complete, and all of us had the same drive for wanting to perform more and more, to get as far as we could. It also just felt very empowering because we are all women,” she said.

Girls just want to have fun

As each member of TimeMachine grew up listening to rock music and alternative rock, it made sense for them to play the genre that they enjoyed, all while shattering gender stereotypes.

“80’s rock is the genre all five of us first performed together, and that’s just one style under the whole rock umbrella. We realised that we loved all the different elements of rock and we automatically clicked,” Cassandra explained.

The music TimeMachine plays is expressive, and Charlotte notes that: “It’s a good genre to get pumped up to and have fun with – the kind of feel-good that leaves you tired, but also evokes powerful emotions of reflection and self empowerment.”

The twins Kassie and Krychell are in agreement, with the former further saying it empowers them, proving that women can listen to and play rock music.

“(Rock and roll) is badass. You get to go crazy while performing. It is (also) stereotypically more of a male-dominated genre, so playing it makes us feel empowered,” Gladys exclaimed.

Like a majority of those making independent music, TimeMachine is not entirely about money making. The “all-girl” label might be scoffed at as a gimmick, but the talent in the band is no joke.

All five band members handle their intruments with deft, and they hope to leave a mark through their music.

“When we write originals, we always want them to have some form of empowerment in them. I’ve personally been brought out of dark places by certain songs and lyrics, and I’m hoping that our music can do the same for other people too,” explains Charlotte.

Both Cassandra and Gladys hope to bring about the normalisation of having more women in the male-dominated music scene, and to inspire other girls to pick up instruments and to believe that they can play music.

The empowerment is not selective either, as Kassie and Krychell explain that they want to create a space safe for everyone.

“We also want to make our shows a space for everyone, no matter their differences, to come together, have fun and feel powerful,” Kassie said.

Having released their first single Witchcraft last year, members of TimeMachine are currently stranded in different parts of the country, while their live gigs have been put on a brief hiatus.

Not letting the conditional movement control order (CMCO) dampen their creative outlets, the band remains in touch with their avid fanbase through their social media accounts, even releasing tutorials on playing their original songs.

Mulan to skip most theatres

The sound of music