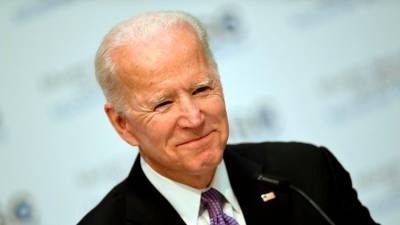 WASHINGTON: Donald Trump’s challenger in the US election, Joe Biden (pix), is soon to announce his vice presidential pick. But what does a VP really do?

The vice presidency may not be quite as frustrating and bewildering as the portrayal given by Julia Louis-Dreyfus in the HBO series “Veep.” But still…

Veeps warm up for the main act. They go around the country telling people how great the president is.

And even if they work in one of the world’s most famous buildings, the White House, there won’t be many streets named in their honor.

The title’s “not worth a bucket of warm spit,“ in the quaint words of Franklin Roosevelt’s vice president, John Nance Garner.

Yet VPs matter hugely for one reason. This is the job, as the saying goes, “a heartbeat away from the presidency.”

In Johnson’s case, it was upon the 1963 assassination of president John F. Kennedy. He was sworn in two hours and eight minutes later, aboard Air Force One.

Gerald Ford took the oath half an hour after Richard Nixon signed his resignation in 1974.

Pence has major duties, including coordinator for the White House’s coronavirus response team, but his main task often appears to be that of Trump’s compliment-giver in chief.

Biden, who served two terms as vice president under Barack Obama, says he is looking for something different.

He talks fondly of his responsibilities when in office, emphasizing how he led the massive 2009 government rescue of the economy. And he says he wants his own VP to be “simpatico” with him.

“I think Biden is looking for a political partner,“ said Joel Goldstein, a law professor at St. Louis University and an expert on the vice presidency.

“I think he means that at a deeper level there will be a real trust running both ways so that this person really functions as one of his closest advisors.”

Biden, who would be 78 on assuming the presidency, is clear that he sees himself as a transitional figure. His deputy, likely to be someone much younger, would essentially be the next Democratic nominee in waiting.

Given that Biden has declared he will choose a woman, she would make history, regardless of how the job went.

Only two other women have previously been chosen as VP candidates for major parties Geraldine Ferraro in 1984 and Sarah Palin in 2008. Neither made it to the White House.

If the vice president did then succeed Biden, she would also become the first female president.

Less formally, some vice presidents, like Dick Cheney under George W. Bush, have earned reputations as the true power behind the throne of an inexperienced president.

But the common assumption that the vice presidency makes a perfect stepping stone to the top is less sure.

Only 14 veeps have made it to the presidency and of them nine weren’t elected but were succeeding presidents who had died or in Nixon’s case resigned.

The last vice president subsequently to win election as president was George H. W. Bush, who was in the Oval Office from 1989-1993.

Unlike presidents, few vice presidents are remembered. If you haven’t heard of William Rufus King or William Wheeler, you wouldn’t be alone.

Hubert Humphrey, president Johnson’s veep from 1965-1969, is at least remembered in song. Sadly, though, the 1965 piece by musical satirist Tom Lehrer is a send-up, asking: “Whatever became of Hubert?”

As shown by Cheney, of course, there are notable exceptions.

Al Gore was almost inseparable from Bill Clinton as VP and even if he lost by a hair’s width in the following 2000 presidential election, he won new global fame as a climate change activist.

If polls showing him on course for victory over Trump are right, he’ll be a staple of the history books for many years to come. –AFP