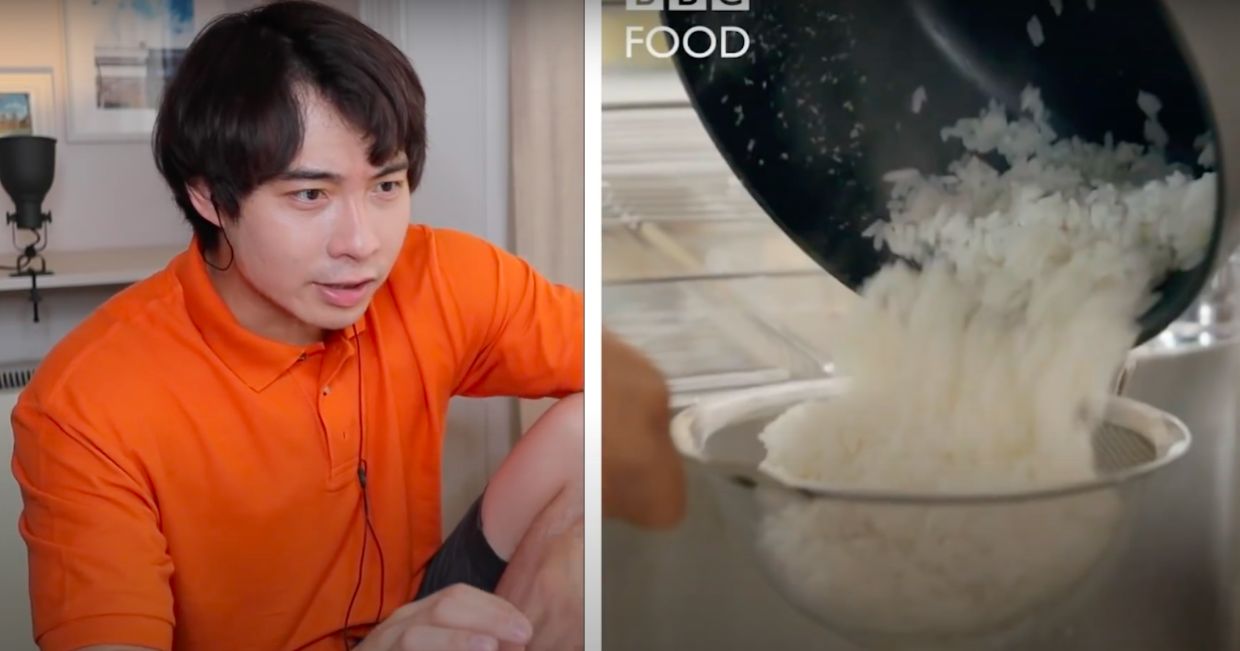 A video about how to cook egg fried rice by the British Broadcasting Corporation (BBC) sent Asians of the Internet into a tizzy, after a London-based Malaysian stand-up comedian mocked it.

In a reaction video on his YouTube channel, Nigel Ng poked fun at how the recipe by BBC Food called for the rice to be cooked without washing it first, then instructed users to rinse off the rice after simmering it for 10 minutes.

Using his Uncle Roger persona, he broke down various issues he had with the video by host Hersha Patel, playing up typical Asian stereotypes.

“What you doing, drain the rice? You killing me, woman. How can you drain rice with a colander, it’s not pasta,” he said.

He also commented on the use of induction cookers instead of gas stoves, the rice looking “too healthy” without MSG, and the use of a metal spoon to scoop rice out of a non-stick pan.

“Few things break Asian people’s heart. One is when your rice runs out, number two is scraping pan with metal spoon,” he said, an offence he described as cause for disownment by one’s parents.

However, Ng didn’t only criticise, expressing grudging respect for Patel’s one-handed egg cracking and the use of garlic and ginger as a base for the fried rice.

The video titled ‘Uncle Roger Disgusted By This Egg Fried Rice Video (BBC Food)’ was significantly more popular than others on his channel, racking up more than one million views versus the average of 50,000 views on other videos.

Fittingly for his commentary about questionable rice making, Ng also hosts a comedy podcast called Rice To Meet You, where he talks about Asian culture.

Although the BBC posted the video to its BBC Food Facebook page on April 25 last year, Ng’s video prompted renewed interest in the video, which now had over 1K comments and 2.1K reactions.

Commenters on the video ranged from providing helpful cooking tips to questioning the BBC’s cultural sensitivity towards Asian cooking, as well as expressing abject horror and disgust over the treatment of the rice.

“Oh my goodness you cooked the rice wrongly!!! Why did you even rinse the rice. The amount of water is wrong too! Your rice is not properly cooked. My late grandmother will come back from her grave to scream at you,” said Facebook user Alex Koh.

“This is soooooo wrooooooong, as an Indonesian veteran fried rice maker, I’m soo not approving this!” added Firman Indra Andika, from Yogyakarta, Indonesia.

Despite the flood of criticism, both the BBC Food video and recipe, which now has 2.5/5 stars, are still available online.

US to ban TikTok downloads, block WeChat use

Could PlayStation 5 and Xbox Series X be swan song for consoles?