Rising from despair and despondency, cancer advocate fights back, perseveres and rises with hope and faith to live on

Boon Lui says cancer has changed the way she looks at life.

FOR Sew Boon Lui, living with a life-threatening disease is living by hope and with hope. “Not having hope will lead us to despair and depression,” she says.

Hope is the one thing that helps her to press on, to be strong and courageous.

Cancer advocate and founding president of Society for Cancer Advocacy and Awareness (SCAN) Kuching, Boon Lui had a cancer relapse in 2017 and since then, has been living on medication with Stage 4 breast cancer, also known as metastatic breast cancer (MBC).

Her first encounter with cancer was in mid-2006. Diagnosed with breast cancer, she needed a mastectomy (removal of an entire breast).

“When the surgeon broke the news to me, my first thought was death. It was the greatest blow of my life at that time,” she recalls, remembering how she could not hide her sadness as the surgeon explained the state of her cancer and the procedures involved in treating it.

“It was like I had been pronounced a death sentence.”

A mother of two young children – her son was nine and her daughter was only five – Boon Lui who was 39 then, could not help feeling sad for her family. She thought she was going to die.

‘Nothing could prepare her for the moment’

Her emotions at the doctor’s office were different from the emotions she had during her counselling session earlier on – prior to the appointment with the doctor, she received counselling from a counsellor who was the vice president of Sarawak Breast Cancer Support Group (SBCSG). The latter was introduced to her by a colleague, who was a survivor of breast cancer. The counselling was highly recommended. Based on her mammogram, there were a few more lumps inside her left breast apart from the one that she discovered herself.

“The counselling was to help me prepare myself for the moment of truth. It did not hit me that hard then as I was still hoping that it was not cancer.”

After the diagnosis, Boon Lui was overwhelmed with sorrow. She cried out to God for His mercy and healing. She wanted to see her children growing.

“My children were the main reason for me to strive to be well,” she recalls her early struggle.

She held on to God and began hoping again. She started reading books on breast cancer, looking for more information that could help her make the right decision – whether or not she should go for the recommended mastectomy.

She also shared about her cancer with the women in her church fellowship group. 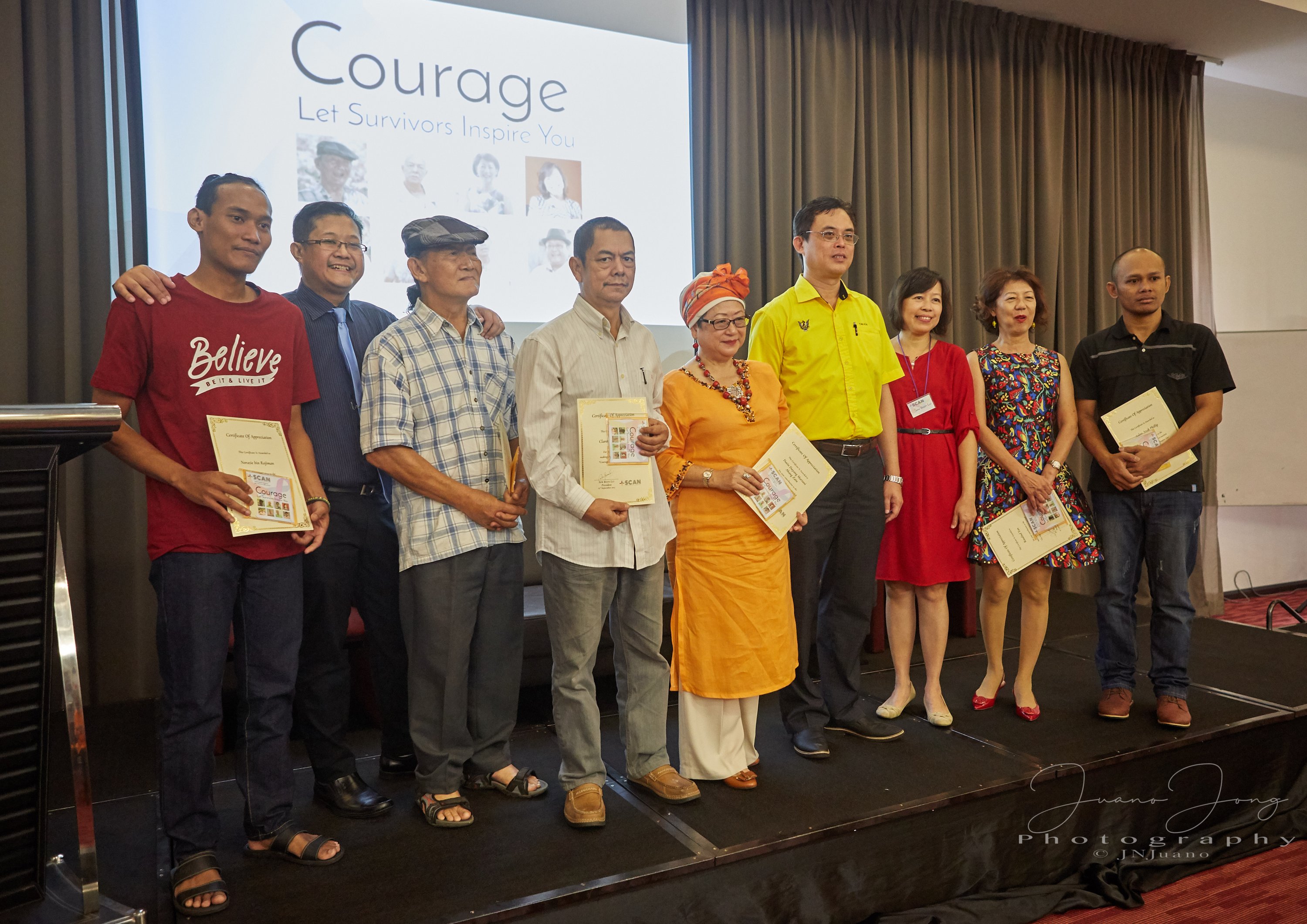 Boon Lui (third right) with some of the cancer survivors who took part in SCAN’s video series after receiving their certificates of appreciation during the launching ceremony on Sept 23, 2017.

The moral and spiritual support she received from them was uplifting.

One of the women was from Singapore and she recommended her to go to the republic to seek a second opinion.

Accompanied by her husband, Boon Lui flew to Singapore.

By the time she returned to Kuching, she had made up her mind to go for the mastectomy as all opinions pointed to it. Hoping for the best, she went back to Singapore with her husband for the surgery. While recuperating, she found that her predicament was teaching her something new every day. Cancer reminded her of the fragility of life, the value of time; it also taught her about courage, about pressing on even in the worst of times, and about empathy.

‘Life took on a new meaning’

A graduate in Applied Science and a Master’s degree holder in Business Administration, Boon Lui gave up her job as quality system/customer quality manager in a solar water plant when she started her chemotherapy in 2007. Having cancer sharpened her perception that life was more precious than anything else and that she had to set her priorities right.

During her many visits to the hospital for her chemotherapy, and then radiotherapy, she got to know other cancer patients. Engaging in friendly conversations with them taught her about courage and hope.

“When one has a terminal illness, there are always reasons to be hopeful.

“For those receiving treatment like me, they can hope that the treatment will work; for those who are in pain, they can hope for a pain management plan that works. And we can hope to be cleared of cancer, to be well again,” she says.

“Sharing our cancer journey with those travelling on the same road is therapeutic in itself.”

Boon Lui recalls how the initial support she received from her church fellowship group and fellow survivors, especially those in SBCSG, touched her heart so profoundly that she was inspired to reach out to other patients. In the course of her treatment, she was moved to join SBCSG where she became a committee member.

A few years later, still having her annual check-up in Singapore and on medication, Boon Lui led a working group in SBCSG to compile a handbook, ‘Coping with Breast Cancer’.

In 2010, she was ready to go back to work – she took up a job as CEO Office Manager with a solar PV manufacturer, a company set up by her previous employer. Despite her work commitment, she continued to reach out to cancer patients and survivors.

Her involvement with SBCSG gave her the opportunity to attend a conference in Kuala Lumpur and another in Bali, where she gained knowledge on cancer advocacy, particularly on how it could help individual cancer patients by raising awareness of the burden of cancer and bringing public concerns about the disease to decision-makers.

It was through the conferences that she came into contact with the founding chairman of Together Against Cancer (TAC) Association Malaysia, Dr Ranjit Kaur, the patient advocate who would become her mentor.

A breast cancer survivor, Dr Ranjit holds a number of important positions in cancer societies at home and globally. Her works inspired Boon Lui, and soon the two got together to organise a workshop on cancer advocacy in Kuching. Attended by 60 participants, the event led to the setting up of TAC’s Sarawak Task Force, which paved the way for the founding of SCAN. Made up of cancer patients, survivors, caregivers and concerned professionals, the society was registered on July 24, 2017, with Boon Lui as its president.

Just as hope was flying high with the birth of the society, Boon Lui had to attend to her own predicament.

Her cancer had relapsed – whilst preparing for the registration of the non-governmental organisation (NGO), she was diagnosed with metastatic breast cancer and was told that the cancer had invaded her right lung, liver and some parts of her spine.

The relapse dealt a big blow to her and her family.

It was just about a couple of months before that she was in Madrid, Spain attending a global conference on cancer. And then in May 2017, despite experiencing difficulty in deep breathing, she went for a family vacation in Munich. She was easily tired during the vacation. Even upon arrival in the city, she was already short of energy. She also had unusual chest pain and dry coughs, not knowing that her cancer had advanced.

‘Another storm to weather through’

“It was another storm I had to weather through. At first, I felt very down and depressed but as I was contemplating, it suddenly dawned on me that I had survived cancer for 11 years.

“It awakened my conscience that I must be grateful to God and hold on to faith that He would see me through. True enough, since the relapse, I have been blessed with a targeted therapy drug that works for me.

“The drug is pretty expensive but by the grace of God, my husband and I are able to bear the cost,” Boon Lui explains.

Her courage is visible. She relates how in October 2019, her doctor discovered that one of the tumours in her liver had increased in size. As advised, she had to undergo an ablation procedure to destroy the tumour. However, five months later, the tumour was found to be growing aggressively and needing immediate treatment.

Consequently, she had to go to a private hospital in Petaling Jaya for an advanced targeted radiotherapy – the ‘Stereotactic Body Radiation Therapy (SBRT) treatment.

Because of the travelling restrictions during the Movement Control Order (MCO) period, her treatment trip this time was rather challenging.

She had to travel alone and with the support letter from her doctor, she passed through the immigration.

In the course of her treatment, she spent 10 nights ‘in isolation’ in her hotel room as visits were not advisable, not even a visit from her sister who was residing in Kuala Lumpur. But she could not be happier as she was able to make it to the Petaling Jaya private hospital where she completed her treatment.

‘Continuing to strive in crusade against cancer’ 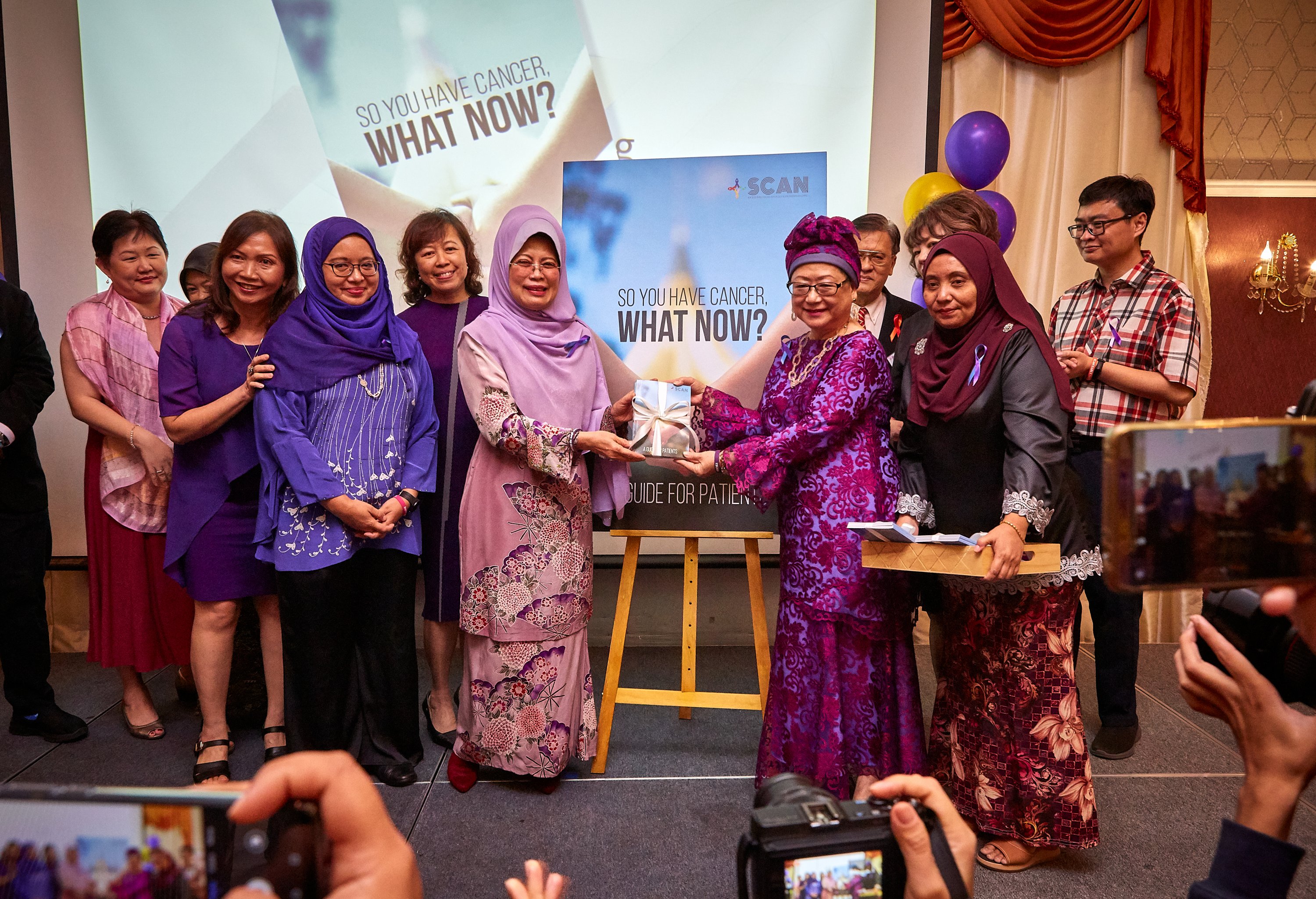 In this photo taken at the launch of SCAN’s book, ‘So You Have Cancer, What Now?’ back in July 2019, the society’s advisor Datin Dayang Mariani Abang Zain (front, second right) hands over a copy of the book to the Minister of Welfare, Community Well Being, Women, Family and Childhood Development Dato Sri Fatimah Abdullah. Boon Lui is seen behind the minister.

Living with metastatic cancer only motivates her further. She continues to contribute passionately towards the cause of SCAN.

“Our society has two missions – cancer advocacy and cancer awareness. We strive to be the voice for cancer patients, advocating for positive change in cancer healthcare and bringing about cancer awareness to the general public,” she points out.

In order to be able to pursue the noble cause, she opted for early retirement from her last post as CEO Office Manager, following her metastatic cancer diagnosis.

“Cancer has changed the way I look at life. I would not be doing what I’m doing today had it not been for cancer. Before, I was determined to make as much money as I could. I wanted to switch to direct-selling.

But now I’m focussed on advocacy initiatives with SCAN,” she adds.

So far, society has made notable progress towards achieving their objectives, including conducting a research on cancer awareness in Sarawak, organising workshops, highlighting issues on cancer healthcare and meeting with the right people, including members of Parliament, as the voice for cancer patients. A guide book for cancer patients and survivors has also been published.

As Boon Lui puts it: “We will continue to strive in our crusade against cancer.”

The past 15 years, including the last four years as a metastatic breast cancer patient, have been a journey of self-discovery and self-renewal for Boon Lui – one riddled with challenges and expectations.

Rising from despair and despondency, when the world seems to come down crushing on her, she has fought back, persevered and risen with hope and faith to live on.

Today, Boon Lui is committed to sharing her story that is set to bring hope and purpose to many who may still be shrouded in fear and uncertainty.