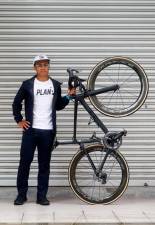 FAZLAN Adhili Mastafa Kamar has had a colourful life as a professional cyclist. The 28-year-old was attached to Italian bike manufacturer Cinelli, and was a member of its prestigious cycling team Cinelli Chrome from 2014 to 2016. The team’s headquarters is in Italy. The team has riders from around the world, but he is the lone Asian representative.

Later he became a part of the UCI Continental Team CCN, which is based in Laos, as their sprinter. He has taken part in various cycling competitions from Europe to Southeast Asia. He is also the proud founder of bike retail store, Plan A, located at Bukit Jelutong in Shah Alam.

theSun recently caught up with Fazlan to ask him more about his life and career.

When did your interest in sport begin?

“My dad was an engineer and my mum was a housewife. I am the second child out of the four children they had. My parents were active in sports. My mother played hockey, and my father was a runner. That influenced me to be active in sports at a young age. I was even a state runner.”

When did your interest in cycling begin?

“I was studying for a diploma in graphic and design. My university only encouraged students to ride motorbikes and bicycles inside their campus, not cars. But the parking lot for motorbikes was so far away, and you had to walk quite a distance before reaching your class. But you could park your bicycle near to your classroom. So, I took up cycling.”

How did cycling become a career for you?

“When I won one of the cycling tournaments in Singapore, the president of cycling team Cinelli Chrome recruited me to be one of their team members.

“I really enjoyed my time there. My favourite experience with the team was that I got the chance to travel to foreign countries for competitions and enjoy beautiful scenery and different cultures.”

What was the most beautiful country you have ever travelled to for your cycling competitions?

“Switzerland and Austria. It was snowing even in summer. In Malaysia we have no snow, so it was my first-time experiencing snow and I was really excited.”

Tell us more about your business Plan A.

“We are doing more than just selling cycling merchandise. We are selling a cycling lifestyle here. We also organise cycling tours. In 2018, Plan A started its very own cycling community project known as Cycling Selangor.

“Every year we have at least six cycling events under this project. This year we are having just one cycling event which will take place at the end of the year because of Covid-19. We have plans to make this project a bigger affair in the future.

“We are also in the midst of talking with an organiser about building a cycling track in Bukit Jelutong. We have some nice cycling lanes in the city. Unfortunately, some people are misusing these facilities, including opening stalls on the cycling lanes, and motorbikes sometimes also use the cycling lane.

“We are trying to prevent these scenarios with the Bukit Jelutong cycling lane.”

Do you still compete in cycling tournaments?

“I am only competing in local tournaments now. If you are competing in international tournaments, you have to give 100% to the competition. At the moment I do not want anything to take away my attention from making sure my business grows in the right direction.”

Do you miss racing at international events?

“Yes. I miss the adrenaline rush of the competition, and the chance to travel to a new country. But sacrifices have to be made if I want my business to grow.

“For example, in the past I owned 12 bikes. I had to sell six bikes and put the money towards the business. Some of these bikes had sentimental value to me. I even used these bikes during some of my international tournaments.

“I am hoping that once my business is in a good shape and I have the cash to spare, I will try to buy back the bikes I have sold.”

Did your parents approve of your interest in cycling?

“My father did not approve of my ambition. He believed that besides football and badminton, you cannot earn a decent living through sports. He runs an oil and gas company where he supplies natural gas. He had high hopes that I would run the company after him.

“But I was set on becoming a cyclist. Two years ago, my father took up cycling as a hobby and now, we can speak about cycling for hours.”

Prince Harry suggests that Covid-19 is rebuke from nature

I WAS IN DEWAN RAKYAT AFTER 14-DAY QUARANTINE : LIEW